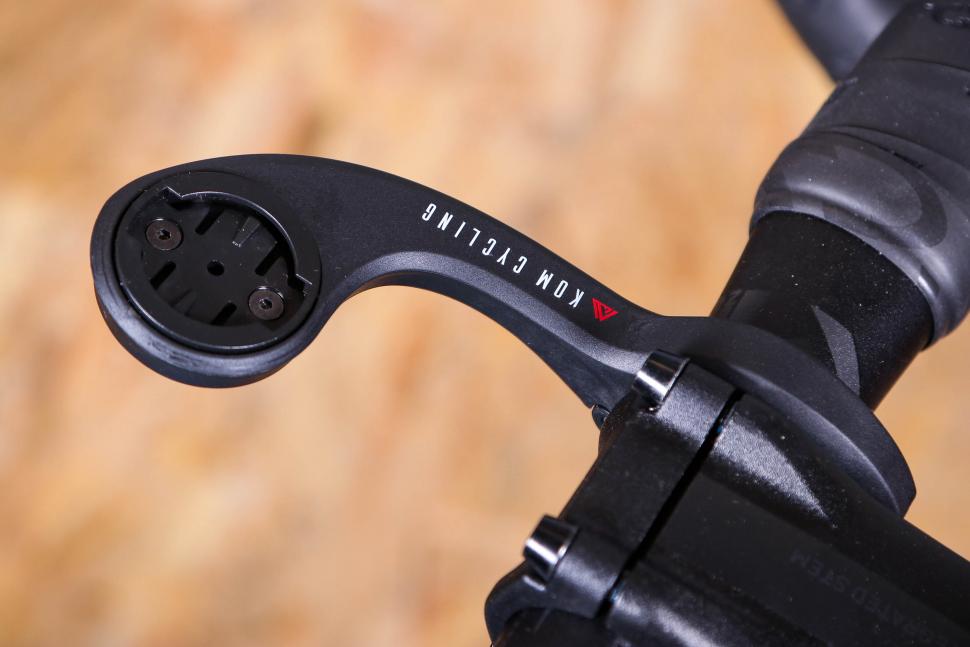 KOM Cycling’s CM06 out-front GPS device mount is available as a mount only or in a kit, as tested, which includes the optional, removable GoPro or compatible accessory fitting that can be fixed below. It’s smart, solid, and offers great versatility for a reasonable price.

Out-front mounts have become standard equipment for many cyclists, and unless your one-piece handlebar and stem comes with an integrated, proprietary mount, this KOM one is a very good option.

The mount comes in one length, in this black finish, or a carbon effect that might appeal to some. KOM Cycling says it’s compatible with all Garmin or Wahoo units, including the Edge 1030 and Elemnt.

Whether you buy just the mount or the kit, you get interchangeable disc inserts for Garmin and Wahoo devices. You can also buy spare accessory mounts, replacement disc inserts and more.

Rubber shims are provided to allow the mount to fit handlebars of 25.4mm, 31.8mm and 35mm diameters. They’re the same width as the clamp, so remain fairly inconspicuous, and when the clamp bolt is tightened, they hold the mount and your accessories rock steady. Your handlebar does need to have 14mm of space to fit it, which isn’t usually a problem unless you have an aero bar, where the central round portion is little more than stem width. The handlebar mount, including one disc, a shim and the GoPro mount, weigh in at just 65g.

The Garmin and Wahoo disc inserts are easy to swap, if necessary, and my Garmin Edge 830 fitted positively with the usual quarter turn.

The 830 is smaller than some and leaves more of the mount visible, sitting further from the bar than it could. Some proprietary mounts have alternate sizes to keep devices close to the handlebar, but the KOM has more length, measuring 84mm from the centre of the handlebar to the device mount’s centre. That might bother some, but personally, as long as my Garmin’s top is horizontal, and level with the top of the handlebar, I’m happy, and in this respect the KOM mount succeeds.

Throughout testing on my usual broken roads and over gravel and woodland trails, I didn’t notice any significant vibration from the KOM mount. Whenever I glanced at the GPS data it was as clear as it could be, and certainly better than a few other plastic GPS mounts I’ve used over the years. I mostly use K-Edge mounts, and apart from the broader mounting footprint of the KOM, their stiffness in use is comparable.


I don’t own a GoPro, but do have a couple of front lights with the same finned mounting. The removable undermount uses the same quarter-turn fit and release action as the GPS, so once your accessory is fixed to the mount, it can be fitted to the bike in seconds, which 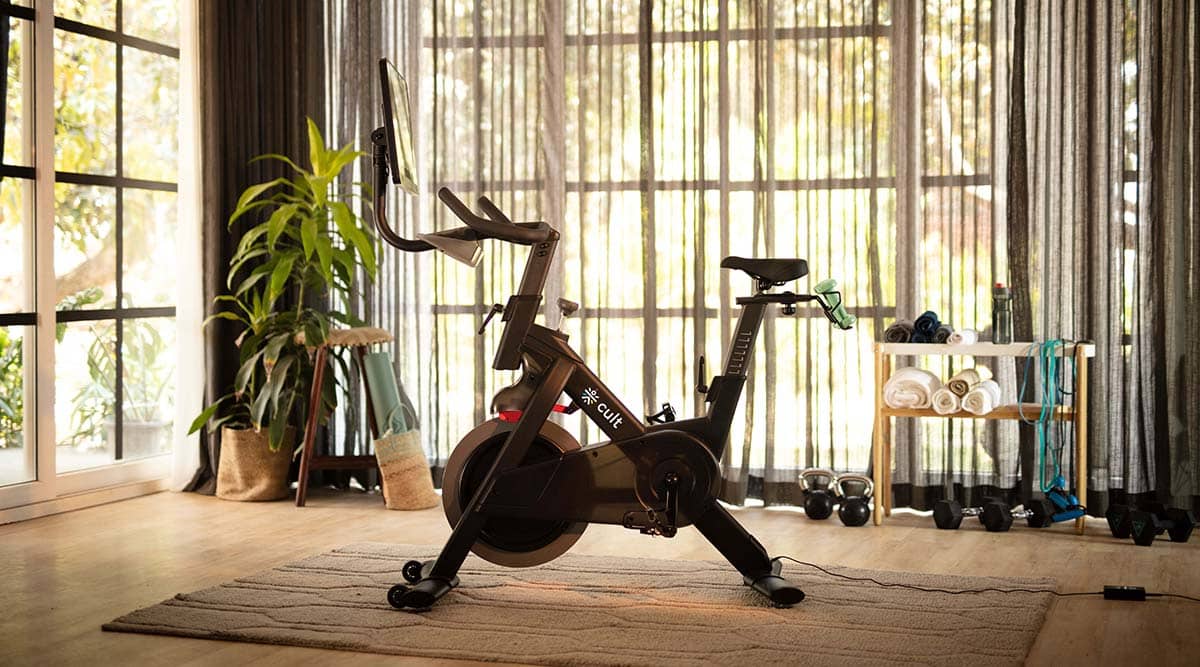 January utilised to be a time when some of us would signal up for a gymnasium membership. But with Covid-19 and Omicron, people times are safely and securely behind us. On the other hand, the need to have to emphasis on our physical wellbeing has only grown. This also describes why numerous are considering dwelling exercise tools critically. The Cultfit bike is a person these types of unit to enable consumers who want to accomplish their conditioning ambitions at home.

Curiously, the Cultbike was originally identified as ‘TreadOne’ till Cult obtained the business and renamed it. It arrives with a display, and the ability to attend reside or on-need lessons. But how does it evaluate up, provided the other solutions in the current market? Let us uncover out.

The Cultbike is undoubtedly imposing at the time it is established up in your home. Just make certain the location exactly where you decide to put it is close to a plug level. That is required for the exhibit to operate. The enterprise will mail an individual to established up the bike, and they will also give a demo of all the controls. Make positive to go by it.

If you are looking at this make guaranteed you have plenty of area for the bike at home. (Impression credit history: Shruti Dhapola/Indian Categorical)

I manufactured the mistake of disregarding it the to start with time since I was caught in office environment operate. And then we had a bit of difficulty transforming the seat top. Nonetheless, as soon as the technician discussed precisely how to use the lever, it was not a obstacle.

This is a magnetic resistance spinning bicycle and very a silent a person when in use. A person can adjust the seat and handlebar as per their height necessity. But the main promoting place right here is the 22-inch show and the content material it features. The show is totally rotatable. Nevertheless, rotating it is like a entire higher human body exercise session.

There is a resistance knob, which you can transform still left or appropriate relying on how a great deal you want to thrust on your own. You can also push the knob correct down and it will crank up the resistance to 100 throughout the session. But it does not remain pressed down.

Cult is presenting reside lessons for spinning. On-demand lessons are obtainable for spinning, yoga, cardio, toughness instruction, and there is the alternative of scenic rides as properly. There’s no subscription nonetheless for these courses. But I’m assuming it will roll this out at some point the moment the organization product scales. The lessons are free ideal now, which is a quite fantastic offer.

When location up the bike, you will want the mobile amount utilized to buy this. It is essential for account registration. Curiously, considering that mine was a overview device, I could